These last two weeks have gone by in the blink of an eye. Jonas’s has been able to produce an incredible 17 different sample boards. I think it must be a record if anyone is measuring such things. I have done a mere three boards that represent techniques that are new to me.

In keeping with our study of these 17th and 18th century recipes we have been keeping industrial revolution work hours as well. Work begins promptly at 8 am and continues until 6pm with a leisurely 20 minutes for lunch. Then after we each head home, for a supper of pizza at the hostel for Jonas, and microwaved spaghetti for me, we each settle in for the evening’s work. By the light of our computer monitors we edit photographs and write up the blog. Bedtime for me this week has been routinely around midnight. It all seems to fit well with the spirit of the project.

Today we are posting the final day of working on the boards and early next week we will post our conclusions with photograph’s of the recent boards and ones I have made in the past.

Today we experimented on how to lay gold speckles onto our varnish. Originally this sprinkling technique came from the Asian lacquer tradition. But there are of course other manners in the way of application. First I will explain on which manner we speckled our panel and will inform what the difficulties where in the process of application. Following I will compare our technique with western ways of application using historic literature.
The following components and instruments our needed:
Leaf gold
Seedlack varnish
Stencil brush
Sieve
First we took the leaf gold and laid it in the sieve. Next we applied another layer of seedlac varnish on our sample board. (Usually the speckles are to be laid on the surface before making the raised areas). For the following procedure you have to be quick because it is the purpose to lay the speckles in the still wet varnish. Then the gold is rubbed through the sieve using the stencil brush. Like I said you have to be quick but you must also be aware that the gold speckles are spread evenly. When I reflect on my first application I was so busy to be quick that I totally forgot to spread the gold evenly. The result is like the two birds are flying in a snowstorm, also nice but was not what I had in mind!
When the varnish partially dry the gold speckles had to be pushed down into the varnish layer because of the reason the speckles had to be covered with varnish to make a flat surface. The next step is to put on layers of varnish until the speckles are covered with varnish to make a flat and glossy surface.
When we compare our technique to the Stalker and Parker book there are some differences. They say you first have to prepare your speckles (probably with a sieve or something similar). The speckles are to be added to the varnish and they advise that the quantity of speckles is not comparable to adding pigment in a lacquer dispersion, instead it is to be added in a much smaller degree. Then the speckles have to be stirred into the varnish. A couple of coats have to be applied on the panel until the speckles are evenly spread. To cover the speckles several coats of varnish are needed (Lacquer mixed with Venice turpentine). If you want to polish your work the following is required; “…having done everything as above directed, tis required that you give it eight or ten washings of your best Lac-varnish being al successively dried on, you are at liberty to polish it”.
Reflecting on the technique we have some questions; if the gold speckles could spread out evenly on surface. On the other hand, the speckles are already in the lacquer mixture covered with lacquer so this may affect the quantity of layers needed to cover them completely. The lacquer mixture with the Venice turpentine used for the following layers will make a thicker lacquer what apparently will result in less layers to cover the speckles completely. So on the Asian way one has more control on spreading the speckles evenly but there are probably more layers needed to cover the surface entirely. By the western way there are probably less layers needed to cover the surface entirely but we think it maybe difficult to spread the speckles evenly. 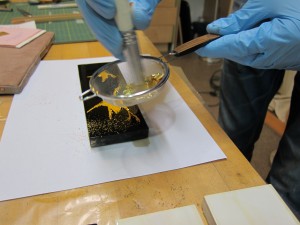 Making speckles with a sieve and laying them in the varnish

Birds in a storm - Speckles on the sample board