When I am at a party and people ask me what work I do, I usually start with; I am a conservator who restores objects. This is invariably followed by a question on exactly what objects I restore. When I say I specialize in lacquer many perk up and demand to know how to fix the scratch in their kitchen cabinets. This where I always get into trouble as I launch into the difference between Asian lacquer, western lacquer and their kitchen cabinets. By this time they start swirling the ice cubes in their near empty glass, mumble something about needing another drink and head to the bar.

The word lacquer can be confusing. It can be applied to many different materials with different properties and the meaning has continued to change over time. Today at the end of his post Jonas sorts out some of the historical references to these terms.

First the lead white has to be mixed with the gum water to make a thick white, paint like mixture. The smalt was mixed with the isinglass size that was warmed to increase the viscosity. After this the two mixtures were mixed with each other, adding the lead white gumwater to the smalt size to make a nice blue colour depending on personal taste. The recipe says “…all these well stirred and tempered together, being arrived at the consistence and thickness of common paint.” It is however not possible to obtain a thick paint like mixture mainly because the viscosity of the gum water, made according to S&P directions, is too low (like water) (fig. 46). In the process of applying the first layers of this mixture it has to be stirred very well because smalt pigment will sink directly to the bottom (fig.47). Although we used a very fine grind of smalt, after applying the mixture the pigment particles could be observed on the surface of the sample board (fig. 48). Chemically the composition of smalt (silicate glass) is variable; it contains approximately 66-72% SiO2 (silicon dioxide), 10-21% K2O (pottasium oxide), 0-8% As2O3 (arsenic trioxide), 2-18% CoO (cobalt oxide) and several impurities. The pigment was used during the 16th and seventeenth century. In the late eighteenth century the use of the pigment declined because of the availability of synthetic blue pigments like Prussian blue. Smalt has a low hiding power and also the colour intensity decreases, as the particles are ground finer. This is why we had to put on several layers to obtain a homogeneous surface. Because of the low index of refraction this resulted in a really mat surface. In total we had to put on 5 layers that had to dry thoroughly between each coat. If not properly dried the previous layer of isinglass would be dragged off. 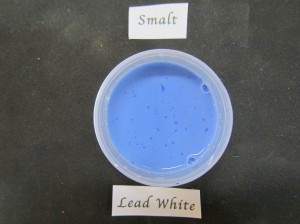 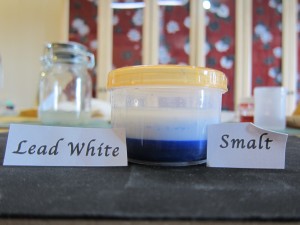 Last week we were talking about lacquers and varnishes. Today I will discuss the terminology of lacquers and varnishes and different uses. The word lacquer, in German lack, in French lacque and Italian lacca comes from the Sanskrit word lãksã or lakh which literally hundred thousand means. One can link this meaning back to swarms of insects (Laccifer lacca) that nest themselves on tree branches from which their secretions are the basis of shellac.(1) This resin is dissimilar to other natural resins as it is one of the few based on animals instead of plants. Shellac was first arriving in Europe at approximately the same time as Asian lacquer, therefore was often confused.

The word varnish, in German firnis, in Frech vernis and in Italian vernice refers to the name of the port town of Bernice (today the day known as the port of Benghazi, in Libya). At that time the resin sandarac (Tetraclinis articulata) was imported to Europe. Although the two different terms lacquer and varnish were used intertwined during the 17th and 18th century without any recognizable difference in meaning are there several German publications from the 19th century that draw a distinction between the two terms. “With the term varnish one means mainly a liquid which under influence of the environment has fast drying properties. For the reason applied in thin layers a glossy, transparent and hard durable layer will be created with which objects can be coated. So the purpose of a varnish is to protect a material against climatological influences from the outside and to give them a glossy surface.’(2)
Under this definition one can also include oil varnishes like linseed especially when enhanced with the addition of dryers.

Some people have attempted to define the two terms by using lacquer for coatings that dry by solvent evaporation and varnishes for those that dry by oxidation of the oil content. This however, does not fit well because Asian lacquer dries by polymerization followed by oxidation and paintings are commonly ‘varnished’ using synthetic and natural resins. Although there have been attempts to define these terms there is still no specific nomenclature to distinguish layers of resin dissolved in alcohol and coatings consisting of oil and resin. I do not think this will help Marianne at parties.